Carrie has been dancing since the age of 2 and will be entering her 20th year of dance this season. She began her journey in the performing arts scene in her hometown of Hammonton, New Jersey at  Paul Morris Dance Explosion. Carrie grew up training in all styles of dance. After 9 years in New Jersey, she moved to the "ABE" area and continued her dance training at the Sharon Plessl School of Dance. During her student years there, Carrie entered the competitive world, focusing on her talents in Gymnastics, Jazz, Lyrical, Tap, Ballet and Pointe. At the age of 16, she began teaching pre-school and combination dance classes. Carrie then graduated from Southern Lehigh Senior High School, where she was a Varsity Cheerleader. Carrie is also a graduate of DeSales University, she currently holds a Bachelors Of Arts in Business Administration and Psychology. Entering her college years, she continued to pursue Master Classes and Workshops in New Jersey, New York and Pennsylvania, as well as teaching recreational dance classes. During her collegiate years, Carrie began choreographing for the Excel Dance Company. She was also a member of the Excel Dance Company prior to that for 7 years. Carrie has performed Locally and Nationally with the company at various locations. Locally, she has performed at: Mayfair, Musikfest, Sportsfest, Dorney Park and more. Nationally, she has performed at: Hershey Park, Six Flags - Great Adventure and at the 2012 Olympics in London, England. Carrie also continued her love of competitive dancing to the Professional Amateur level, maintaining an undefeated 1st place rank until the age of 20. It was then she knew that she was ready to share her competitive passion with her students and began teaching competition classes and solos. Not long ago, Carrie began her Professional Dance/Performance Career dancing for American Stand-Up Comedian/Actor/Writer/Producer; Hannibal Buress in March 2015. She has also danced for Singer/Songwriter/Parodist/Record Producer/Actor/Music Video Director/Film Producer/Author; Alfred "Weird-Al" Matthew Yankovic in June 2015. After 10 years of dancing in the Allentown area, Carrie is ready to begin her new journey with The Asylum Dance Project. She brings inventive and imaginative ideas to her classroom and can't wait to share her fun, buoyant personality with her students.


"A Dance Teacher Helps Their Students Find The Song In Their Heart, The Beat In Their Feet, And A Passion For Life." 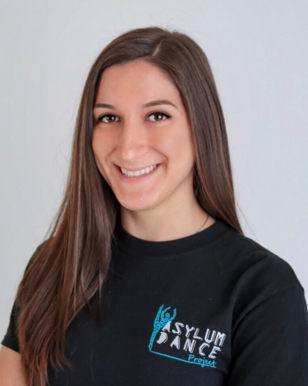